Alex McGregor: An Advocate for Irrigated Ag Informed by 140 Years of Family History

Posted at 16:40h in Voice of the Project by Katlyn Straub 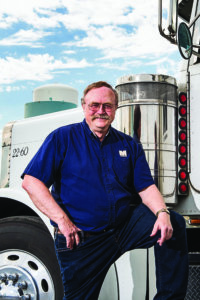 Alex McGregor’s family has been involved in agriculture in the inland Northwest for 140 years. That means that the McGregors have seen central Washington transformed from a dusty wasteland to one of the nation’s most productive farmlands. Meanwhile, they founded the McGregor Land and Livestock Company and the McGregor Company, which provides agronomic supplies and experience to 2,000 farm families in the Northwest. Mr. McGregor has also worked intensively with the Columbia Basin Development League (CBDL) and other stakeholders to support the full development of the Columbia Basin Project (CBP) through the Odessa Groundwater Replacement Project (OGWRP) and to promote Washington’s irrigated agriculture and the many livelihoods it supports.

Irrigation Leader: How do you help advocate for Washington agriculture?

Alex McGregor: It’s been 37 years since I first testified before Congress about dams, trade, farm families, and people with a passion for what they do. I’ve always believed that all of us who serve agriculture have a duty to get involved, to speak out, and to make a difference for the people we’re honored to serve. It has been a privilege to have been able to work together with so many fine friends across the Columbia basin and beyond with whatever projects come our way. I currently spend much of my time helping show that we can have healthy rivers and a healthy economy without actions like breaching the lower Snake River dams and potentially others after that. We have a lot of clout and get things done when we all pitch in and pull together.

Irrigation Leader: What is your relationship with CBDL today?

Alex McGregor: Our relationship is strong. I’ve worked with CBDL for a long time. We’re delighted to have been not only financial contributors, but more importantly, contributors of our time and energy. Alice Parker, who served as CBDL’s director for many years, came to the area with her husband Ike when water first flowed and started farming the new land. Dust was everywhere. She remembered that the only places in their trailer where dust didn’t accumulate overnight were the white spots on the pillows where they lay their heads. As Alice will often put it, “We’ve got to start speaking out really loud. We must work together as growers, agricultural businesses, agencies, communities, and political leaders through collaboration whenever possible, in addressing the complex environmental and economic concerns. Teamwork with applicable and practical experience and advice from farm families brings dramatic results.”

Vicky Scharlau, who currently serves as executive director, shares that same sense: “Wells are going dry; we’ve got to push harder and be louder. Water for thousands is at risk. We’re losing what we assumed to be safe and sustainable: our water.” I am determined that we not let that happen. My cousin and former long-time ranch manager, Bill McGregor, once told me that pioneer farmers brought three traits that helped them persevere when they came west—unquenchable optimism; a wry, self-deprecating sense of humor that helped them through the tough times; and a tenacity verging on stubbornness. These traits, he went on to say, were useful then, are useful now, and will be useful in the future. Those values plus a strong sense of teamwork and
shared purpose have helped the agricultural community win the day, whatever challenges lie ahead. CBDL is a powerful voice for its members, and it’s been a pleasure to reach out and help carry its message and other shared concerns to state legislators, members of Congress, farm families, and urban audiences year after year.

Alex McGregor: In 1935, Congress authorized the provision of Columbia River water to more than a million acres of desert in eastern Washington. Thirty years and more went by without that river water reaching many thousands of authorized acres. To help farmers get by, pending the arrival of the hoped-for water, wells were authorized to tap into ancient Ice Age floodwaters across the eastern flank of the still-water-hungry land.

The river water never arrived, and the wells had to go deeper and deeper, sometimes 2,000 feet or more, sometimes reaching more saline groundwater. Fertile cropland started to go idle, and water for homes, wildlife, and underserved rural communities was threatened. 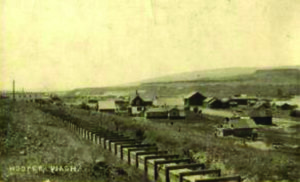 This picture of Hooper, Washington, taken circa 1912, depicts the Palouse Irrigation and Power Canal (foreground); the Hotel Glenmore,
today the Hooper Hotel, built to provide lodging for irrigation crews (the white building farthest to the left); the McGregors’ apple orchards (background, left); the home of Archie and Jennie McGregor, where Alex McGregor was raised (the two-toned house in the center); and warehouses for the McGregors’ Glen Ian apples (background, right).

OGWRP is an aquifer rescue mission. It involves collaboration among partners that include Reclamation, the Washington State Department of Ecology, irrigation districts, and landowners. Much progress has been made through advocacy and outreach, coordinated through coalitions including CBDL, the Columbia Basin Sustainable Water Coalition, and others. Here’s what’s at stake: Just in potato production, the potential annual losses are $100– $140 million. The risk is $1.6 billion in annual revenue, 3,600 jobs, and nearly 100,000 productive irrigated acres. The land, with 6–10 inches of rain, sometimes less, would be much less productive if the water were taken away.

Let’s look at the progress. Work began in 2004 to find ways to share future water supplies for municipal, industrial, and agricultural uses. Reclamation, Ecology, and the Columbia basin irrigation districts got together and signed a memorandum of understanding.

Then, Governor Christine Gregoire permitted the state to share costs, with the legislature pitching in as well. Ecology then created the Office of Columbia River. The first leader of the new office, Derek Sandison, who is our current state director of agriculture, reminded people that big projects don’t happen overnight, but they do happen if enough people pull together to make them possible. Reclamation authorized an environmental impact study, and the East Columbia Basin Irrigation District gave the green light to pursue a course of action. It was interesting to me that one of the annual speakers at the 2013 CBDL annual dinner, Grant Pfeiffer, was eastern Washington’s lead for Ecology. “We are excited,” he said, “about working together with agriculture and helping address water issues. What a process!” Along the way, it included a sovereign review team with representation from 4 Northwest states, 15 tribes, and 11 federal agencies; a consultation on the Endangered Species Act; and a search for new secondary water rights from Lake Roosevelt. What a process indeed!

It’s time to call for action. At least $300 million will be needed to complete this project over the years to come. Together, we can and will do it, replacing the wells with a small portion of the mighty waters of the Columbia, thereby allowing the continued production of high value crops on 97,000 acres while preserving the ancient deep waters.

Fundraising will allow CBDL to connect more citizens to the cause and to push for more state and federal support. CBDL has done well over the years, communicating a sense of urgency about what is at stake. One of its strengths is its strong focus on protecting and enhancing the CBP. Another strength has been its powerful and consistent message. I think about it in six pieces: First, replace the wells with renewable surface water; second, protect the water supply for our rural communities; third, protect the potential $5 billion in economic activity in the region; fourth, ensure food security; fifth, protect the environment; sixth, protect wildlife refuges. As I see it, farms, food security, communities, economic vitality, and our environment are all at risk.

There are encouraging signs of progress. Among them are elements of the federal infrastructure package alertly fought for by Washington’s United States Senator Maria Cantwell, who chairs the Senate Energy and Commerce Committee. Those include an $8.3 billion western water infrastructure package and a provision for federal technical assistance for groundwater recharge, aquifer storage and recovery, and water source substitution for agricultural production projects. Such programs will help with water storage in the Odessa and Yakima regions, the upgrade of a pumping station at Grand Coulee, U.S.-Canada Columbia River Treaty negotiations, and the improved coordination of water flows between the two nations. It’s a big deal, and it will help irrigators here and around the nation.

It’s been a privilege to work with CBDL and farmers across the irrigated Columbia basin and adjacent dry-land areas. The OGWRP effort affects so many people. The fact that we could take on a project like this and win the support of communities and people interested in the protection of wildlife, agriculture, and so many other enterprises makes me excited to see what else can be done. I’m an unquenchable optimist, and this step forward, though there are many more to follow, keeps that vein of optimism running strong.

Irrigation Leader: What is the best way to balance water use and environmental interests?

Alex McGregor: OGWRP shows what can happen when people from a wide variety of backgrounds work together to get things done. I’m devoting a lot of my time lately to writing, meeting, and giving speeches about the need to find common ground on salmon and the four lower Snake River dams. It’s been a long term battle, fought for more than a quarter century. There are no simple solutions, and the aggressively funded advocacy effort to breach (that is, destroy) the Snake River dams would return tens of thousands of acres of irrigated farmland to desert; deprive the Northwest of efficient, low-cost, renewable hydropower; and replace energy-efficient tugs and barges with trucks and trains, which emit more greenhouse gases and thereby worsen the ocean temperature crisis faced by our iconic salmon.

The Columbia River ports—the largest in the nation for wheat, the second- and third-largest for corn and soy, respectively—are vital to our economy and the world. Barges bring fertilizer upriver, making timely deliveries to hundreds of thousands of acres of family farms. The infrastructure package that Senator Cantwell played an important role in shaping provides badly needed funding for salmon research, habitat, and hatcheries and for other improvements that can bring lasting benefits rather than harsh rhetoric and endless lawsuits.

I can say from experience that pessimism is a self-fulfilling prophecy. Farmers and those of us who serve them have set higher marks when we are equipped with optimism, tenacity, teamwork, and a great story to share about what we do and why. When we flex our collective muscles and speak loudly, as CBDL leaders Alice Parker and Vicky Scharlau advise, we hold our own, overcoming many a challenge along the way. We should accept nothing less.