Posted at 15:00h in Voice of the Project by Katlyn Straub 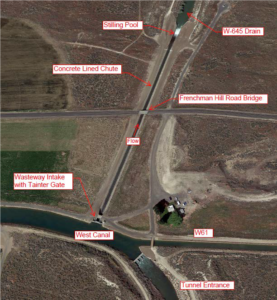 General location of proposed Homestead Pumping Plant at the confluence of the W645 Drain and Frenchman Hills Wasteway.

This 2021 irrigation season developed into the hottest year on record in Central Washington. The hottest recorded temperature occurred in Ephrata, Washington on June 29 at 116° F; June and July were five to nine degrees above average. These extreme temperatures resulted in extended peak irrigation demands. The West Canal operated at peak throughout June and July.

The Homestead Pumping Plant, if sized to pump 200cfs, would meet the demand of the current developed lands allowing normal capacity operation. A pump plant of this size is estimated to cost $10,000,000. A Homestead Pumping Plant could be sized to provide water to deferred and bypassed lands completing the development of lands within QCBID. A Homestead Pumping Plant sized to pump 400cfs to meet current and additional demand is estimated to cost $15,000,000. QCBID’s next steps are to have dialogs with Reclamation about the best way to work toward implementation of this project and to begin committing funds for initial engineering studies once this path is determined