Posted at 13:33h in Voice of the Project by Katlyn Straub

The League’s 57th Annual Meeting was held Thursday, November 4 via Zoom with a keynote presentation by U.S. Bureau of Reclamation’s Columbia-Pacific Northwest Regional Director, Lorri Gray. If you missed the Annual Meeting, here is a short recap. The League recognized three outgoing board members: Bill Wagoner, Joe Gross, and Randy Gubler. We thank them for their years of service and wish them well. The League welcomed Doug Muscott of Lad Irrigation to the Board of Trustees.

Overview of recent and upcoming activities by the League: 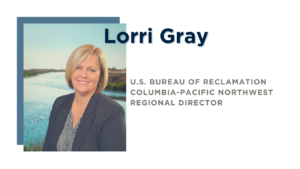 The League salutes Director Gray for over 36 years of federal service, and congratulates her on her retirement!

League Annual Meeting’s keynote speaker, Director Gray, announced her retirement starting December 31. While the U.S. Bureau of Reclamation (USBR) searches for a new regional director, Roland Springer and Jennifer Kerrington will play interim roles. Gray gave Washington State a shout out by saying: “I have worked with about 12 different states throughout my career, and the state of Washington is frankly one of the very best partners that I have had the opportunity to work with.”

Director Gray also shared that the USBR continues to be active in the Columbia Basin Project, working with department of Ecology, and irrigation districts. Some accomplishments she highlighted includes:

If you would like to keep up-to-date on League’s
efforts and activities, become a member! You can also sign-up for bi-monthly news drops, and the Voice of the Project newsletter at www.cbdl.org/newsletter-sign-up. Follow us at @ColumbiaBasinDevelopmentLeague if you’re on Facebook, for regular updates on the Project.