Meet John O’Callaghan and Get Updated on SCBID

15 Dec Meet John O’Callaghan and Get Updated on SCBID

Posted at 14:23h in Voice of the Project by Katlyn Straub

Q. What did you do before coming to South Columbia Basin Irrigation District (SCBID)?

A. I started working on the Columbia Basin Project April 1, 1991, at the Columbia Basin Project Office, now called the Bureau of Reclamation’s Ephrata Field Office. I worked for 24 years in the Operations group, working in water operations, hydrography, facility O&M, dam safety and other related activities. We had responsibility for O&M oversight on the north central Washington irrigation districts, as well as irrigation districts in northern Idaho and western Montana. I progressed into management at EFO, first as the water operations team lead, and then the technical services supervisor. I have been very fortunate to benefit from a wide variety of mentor and colleagues throughout my career. These are people who have a wealth of knowledge with the formative years of the Project, such as Francis Jensen, Ron Jeske, Bill Gray, Shannon McDaniel, Dick Erickson, Keith Franklin, John Baird, Richard Lemargie, and Merle Gibbens, as well as people who bring depth of experience from outside the Columbia Basin Project (CBP) such as Stephanie Utter, John Moody, Dave Solem and Larry Martin.

Q. Tell us a little more about your background and interests.

A. I grew up in south Snohomish County in an area that was rapidly urbanizing during my teen years. I left after high school to attend Washington State University (WSU) as a third generation Coug. Having moved to Eastern Washington, I resolved never to live in Western Washington again. I completed a B.S. in Agricultural Engineering in Fall of 1987 and went directly into WSU’s graduate program while working for USDA on campus. After a couple of years of grad school, Francis Jensen, who was Reclamation’s Operations Supervisor at the Columbia Basin Project Office, offered me a job in Ephrata. The timing coincided with the birth of my son, which had shifted my priorities. So, rather than finish my graduate degree, I went to work for Reclamation. My avocational interests have consolidated over the years, with my primary focus now being skiing (in all its flavors), backpacking and hiking, hunting, and cycling.

Q. What is your vision for the South Columbia Basin Irrigation District?

A. SCBID is a strong district. Our strength comes from our people, their work ethic, skills, and experience. We have an experienced and savvy board of directors who clearly understand the CBP, the District and their responsibilities. Our primary mission is the same as all irrigation districts – to serve our water users with reliable, cost efficient water. We have been successfully doing so since transfer in 1968. I think the principal function of the district’s management team and workforce is to manage risk to the district and our water users. Most of what we do serves this purpose in some way, whether it’s improving facilities and operations, adopting new technologies, securing our workforce, addressing regulatory and political issues, and most importantly the daily work of delivering water. It is not very exciting, but my vision for SCBID is to keep doing what we do and to steadily improve on it. The CBP is not here for the short-term. We are working towards the next 50 years and beyond.

Q. What is your perspective on the Columbia Basin Project – the project and its path toward completion?

A. Those of us who are part of the CBP community know the benefits to be realized by completion of the project. The State of Washington has clearly recognized the desirability to continue building out the project and has responded aggressively. Unfortunately, it seems like there is less enthusiasm in the federal arena for large Reclamation projects. Cost is usually floated as the main objection, but I think there is no shortage of money. There are many places the federal government spends vast quantities of money for activities that would appear to have way less long-term benefits to the nation. And regardless of the potential of available federal funding, the legal and regulatory environment that federal agencies must operate in makes traditional large infrastructure accomplishments extremely difficult. Engaging the private sector, with private capital, may represent a way forward. I realize this requires a significant paradigm shift, but the last 30 years of effort has shown the difficulty of achieving on-the-ground progress, so maybe public-private partnerships could provide a path forward.

Q. What are your priorities? How will you prioritize items like infrastructure reinvestment projects, or the Odessa Groundwater Replacement Program?

A. In the short term, SCBID’s direct interest in OGWRP lies with the proposed EL86.4 pipeline system. We are committed to participating with ECBID in making that project happen, though our main role is to not get in the way. To that end we are in the process of drafting the necessary documentation to facilitate ECBID writing contracts to serve SCBID lands. SCBID has several other priorities that we continue to work on. Regarding Project Reserved Works, the District is focused on the repair of the Potholes Headworks outlet transition and the Trail Lakes section of the Main Canal. We hope to make some progress this off season with the Potholes Headworks project. Urbanization issues in Block 1 occupy a significant amount of our attention and we are working with the City of Pasco and property developers in this area. Block 1 is the focus of several related complex operational issues and we have been working this problem for the last 6-plus years. We have made significant progress and are now getting traction with the city on solving the part of the puzzle that involves them. Two other issues that have been around a long time and continue to occupy the district’s attention are the Potholes Supplemental Feed Route and the East Pasco Basin Groundwater Program. Both these issues move very slowly, though we are encouraged by the recent state legislation which will ease the way for developing the groundwater program.

Q. Winter is here. Can you share some plans about repair and maintenance projects? 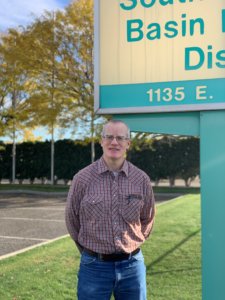 A. We have a wide variety of maintenance and improvement projects every year. We are starting a multi-year program to replace pumping plant discharge manifolds. We continue to build traveling weed screens for pumping plants. Most years we do a certain amount of piping projects, but due to the high prices of pipe and limited availability we are choosing to forego any major pipe projects this winter. We will be automating four more lateral headworks and are starting work on fully automating lateral control of the lower portion of the Pasco Pump Lateral in Block 1.