Posted at 14:01h in Voice of the Project by Katlyn Straub

You can produce more potatoes on an acre of ground in the Columbia Basin than anywhere else in the world. This worldly distinction is only made possible by water.

Potato production in Washington State is responsible for over $7.4 billion in economic activity and employs over 36,000 people to grow, process, and transport the annual potato crop. And, the demand for potatoes and potato products continues to grow, particularly in the Pacific Rim. In fact, the Washington State Potato Commission had to put customers on rations due to the strong demand for our potatoes and potato products. To meet this growing demand, we need to gradually expand the availability of irrigated ground within the
Columbia Basin Project (Project) for additional potato production.

One of the most critical partners in preserving and expanding the use of water in the federal Project is the Columbia Basin Development League (League). The Washington State Potato Commission is always an active supporter and sponsor of the League. The expertise of the organization is thoughtful, professional, and effective. Vicky Scharlau and her team provide amazing management, communications, and enthusiasm for the organization. Their consultant in Washington, D.C. has the connections and communication tools that have raised the profile of our water issues within Congress and the Administration. I cannot say enough about the League’s representation in Olympia. Mike Schwisow, known by everyone as “Mr. Water”, plays a critical role in securing funds for the water replacement project in the Odessa Sub Area – Odessa Ground Water Replacement Program (OGWRP). 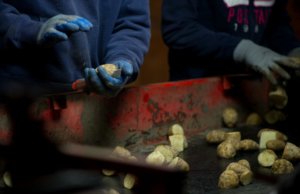 The Odessa Subarea plays a very critical role in our potato community, but it is threatened by declining wells in the area. The potatoes grown in this region of the Basin last the longest in storage. You can harvest a potato in early October, put it into storage, take it out nine months later, and it is just as fresh as the day you harvested it back in October. We believe the heavier soils of the Odessa Subarea are the key factor in its ability to produce potatoes that maintain their high quality in storage. Our 10 potato processors in the Basin rely on the potatoes from the Odessa to operate their plants year-round. Without the long storing potatoes from the Odessa Subarea, our processors would have to idle their $500 million processing plants for several months each year, making them less competitive.

The League and the East Columbia Basin Irrigation District have been critical partners in getting new surface water to the wells that are going dry in the Odessa Subarea. I cannot express enough gratitude for the work that they have done, and I look forward to our continued efforts to preserve farms, jobs, and our rural communities whose livelihoods depend on water.