Posted at 16:22h in Voice of the Project by Katlyn Straub 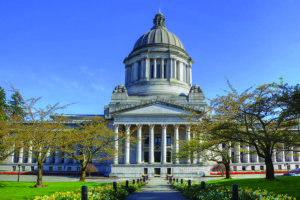 The Washington Legislature concluded its 60-day session on March 10. Much less time was available for committees to hear and act on bills in advance of cutoff deadlines due to the nature of short sessions. Fewer new bills were introduced during the second year of the biennial session as bills from the first (odd numbered) year were carried over for potential consideration.

One of the short session activities was to write supplemental Operating and Capital Budgets. This is an opportunity for legislators to address emerging issues that have developed since the adoption of the budgets in 2021. No changes were made to last year’s appropriation for the Department of Ecology’s Office of Columbia River, which means the two-year funding for projects for the Odessa Ground Water Replacement Program remains the same.

The Office of Columbia River contacted the League at the end of last year about the sunset of RCW 90.44.520 on July 1, 2021. This section of state law was enacted in 2006 through a bill sponsored by Senator Mark Schoesler which contained a 15-year sunset provision.

The law, limited to ground water rights within the Odessa Ground Water Management Subarea, protected those water rights from relinquishment when a reduction of use is involuntary and deemed a standby or reserve supply.

This is critical because, according to Ecology, “Washington’s water law includes the principle that a water right is confirmed and maintained through beneficial use. People often use the expression ‘use it or lose it’ to describe this principle. Put simply, a water right may be wholly or partially lost through extended periods of voluntary non-use.” But, some landowners drawing irrigation water from the declining Odessa Aquifer have wells going dry, and they have involuntarily stopped using water from that well(s) because there is no water to use.

So, until the law expired last year, it allowed those landowners to stop using those rights without having the nonuse subject to the water code’s relinquishment provisions, and it allowed them to maintain valid rights that could be exchanged for Reclamation water supplies as the Odessa Ground Water Replacement Program developed. When the law expired, the League reached out to Senators Warnick and Schoesler, who recognized the need to renew the expired protection and immediately drafted a bill for introduction.

Thanks to diligence by the League, and strong support from Senators Warnick and Schoesler, Representatives Dent, Dye, Schmick, and Ybarra, and involved partners and stakeholders, SB 5860 was signed by Governor Inslee on March 12, 2022.