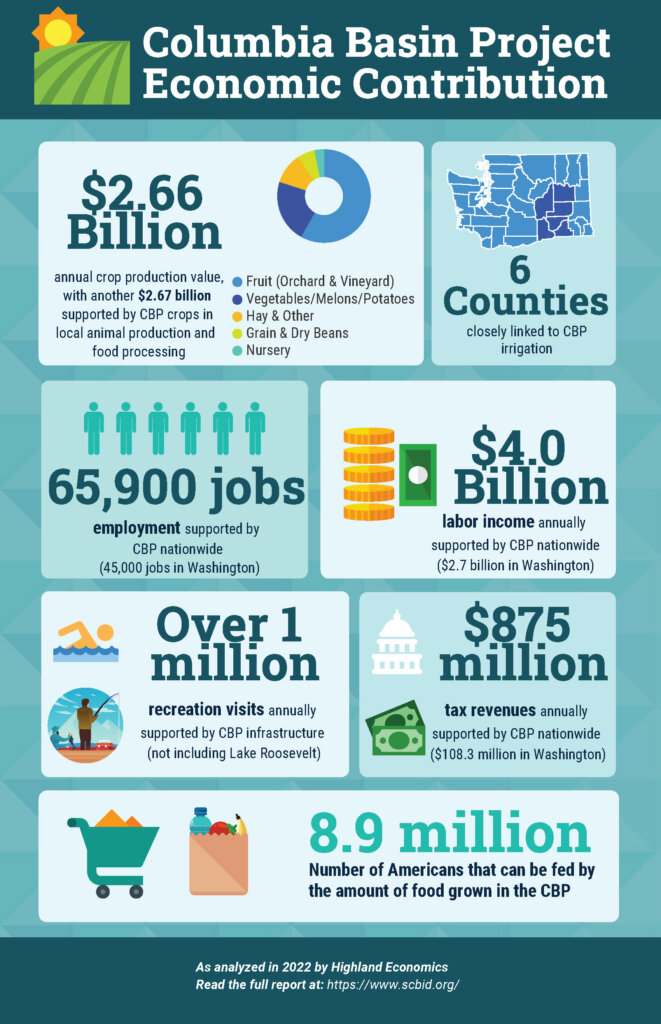 The Columbia Basin Project is a multi-purpose, federally authorized Bureau of Reclamation project located in central-eastern Washington State with diverse and direct benefit to local, state, and national economies.

The largest of Reclamation’s Projects in the United States, the Columbia Basin Project generates over $4 billion in annual, cumulative economic activity (not including power generation). In addition to its hallmark power generation--primarily at Grand Coulee Dam—there are nearly 700,000 acres of irrigated agricultural lands, ample recreational opportunities that draw three million annual visitors to fish, hunt, camp, swim, and explore. The Project has created biodiverse wetlands that form part of the Columbia National Wildlife Refuge, and provides for flood control and municipal and industrial water uses.

If you live, work, or play in Washington, the Project impacts you. It is the foundation for livelihood, quality of life, and a secure tomorrow.

The economic vitality made possible by the Project is at risk, threatening the foundation upon which much of central-eastern Washington has been built.

The Project is not fully developed. While nearly 700,000 acres have access to Project water for irrigation, over 300,000 acres await a reliable source of irrigation water.

Project development was intended to occur in phases, over multiple decades, beginning over 70 years ago. The current phase focuses on addressing the crisis of the Odessa Aquifer depletion by transferring up to 87,700 acres irrigated by deep wells to Project surface water. The Washington State Department of Ecology estimates failure to address the aquifer depletion will result in the loss of 3,600 jobs and $840 million annually in agricultural production in the Odessa Subarea alone.

Existing Project infrastructure is aging and in need of replacement and repair. Originally authorized by Congress in 1933, the Project has a rich history and legacy. However, its age also means some infrastructure is more than 70 years old.

Project partners and stakeholders are at work to address these threats. Preserving and protecting the Project is an ongoing and significant undertaking requiring a confluence of public and private interests and priorities.

These challenges are shared, requiring significant financial contributions, addressing both continued development and infrastructure reinvestment, from federal, state, and local governments, as well as participation from private landowners. Many will benefit if challenges are overcome – agriculture, local businesses, municipalities, recreation-seekers, wildlife – many will lose if challenges go unaddressed.

miles of irrigation drains and wasteways

acres developed with access to renewable Project water for irrigation

kilowatt-hours of electricity generated each year

Nearly 700,000 acres has been fully developed and irrigated, but over 300,000 acres await the infrastructure needed to supply a reliable source of irrigation water to expand food production and security, and to sustain and grow economic vitality.

The entire vision of the Columbia Basin Project can be accomplished with the combined efforts of Project partners and stakeholders.

Stay up to date with Project happenings every month.
Sign Up