Posted at 14:04h in Voice of the Project by Katlyn Straub

Earlier this year, we reported the status and progress of a stakeholder engagement project that formed the Columbia Basin Project “Voices” Task Force, responsible for collecting stakeholder input on Columbia Basin Project priorities. During the month of September, an electronic survey was promoted and sent to Project stakeholders. In October, 255 responses were collected and analyzed by a contracted firm—Vega Nguyen Research--specializing in survey research. In November, the League board was presented with a report detailing survey results and recommended next steps. The outcomes served to validate what was known and account for what was not known. The following are highlights from the report. The entire 55-page report is available here: https://bit.ly/2psHJCc

The purpose of the survey was to collect data to drive development of future League goals and objectives by assessing:

• Knowledge of existing issues around water availability and possible solutions to water shortages
• Priorities of different stakeholders of the Columbia Basin
• General awareness of the League’s existence, purpose, and role in the community and with the Columbia Basin Project

Four main groups were analyzed to compare differences among groups of stakeholders:

1. the total sample, which includes every respondent
2. elected officials
3. landowners/farmers/growers
4. those unfamiliar with the League

The majority of responses came from areas in or around Moses Lake, Tri-Cities, Ephrata, Othello, Odessa, and Ritzville. The majority of respondents believe groundwater use is the most important problem facing the Columbia Basin today. However, respondents unfamiliar with the League and those in the Tri-Cities area cite environmental issues as their top priority. Further, the most important concerns outlined by respondents are depletion of the Odessa Aquifer, followed closely by completion of the Columbia Basin Project, and then, updating/fixing dated or failing irrigation infrastructure. 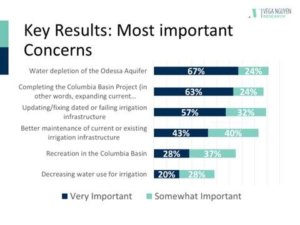