Posted at 13:53h in Voice of the Project by Katlyn Straub

Five State Senate seats were on the ballot in November, which was unusually large for an off-year election. Political pundits agreed that four seats were safe. The 45th District seat (Kirkland, Woodinville) was up for grabs in what has been considered a swing district. The race between Republican Jinyoung Englund and Democrat Manka Dhingra became the most expensive Senate campaign in State history with over $5.8 million spent. The outcome of the General mirrored the Primary where Dhingra won. 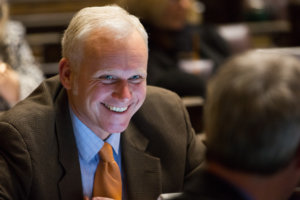 The Senate has a 25-24 majority/minority, but Democrats now have the 25. The House and Senate were in Olympia in November for Committee Assembly for working sessions in preparation for 2018. The Senate Democratic Caucus met to make plans for Committee structure and appoint Chairs. Party priorities are often reflected in Committee structure. Legislator expertise, interest and seniority are reflected in Committee Chairs. Those decisions have a direct effect on success or failure of legislation. Committee Chairs control the Committee’s agenda and what bills are heard or brought up for a vote.

Senate Democrats made changes to Committees that consider bills of interest to Washington’s agriculture. Under Republican majority most ag and water issues were handled by the Agriculture, Water, Trade & Economic Development Committee, chaired by Sen. Judy Warnick of Moses Lake. The 11-member Committee had broad subject matter jurisdiction, including economic development and water quantity and quality issues. Natural resources and parks issues had a separate committee.

The new Democratic majority restructured that approach. A new five-member Economic Development & Technology Committee will be chaired by Sen. Marilyn Chase of Shoreline. Sen. Chase was ranking minority member of the former Ag Committee who has an interest in economic development in rural Washington. Ranking Minority Member will be Sen. Sharon Brown of Kennewick.

Ag and water quantity issues will be in the jurisdiction of the new five-member Agriculture, Water, Natural Resource & Parks Committee. The Chair will be Sen. Kevin Van De Wege who is a Port Angeles firefighter and paramedic serving his first term following five in the House. Other Democrats will be Sen. John McCoy of Tulalip and Sen. Sharon Nelson of Maury Island -- also new Senate Majority Leader. The two Republicans on the Committee are Sen. Judy Warnick of Moses Lake and Sen. Jim Honeyford of Sunnyside. Warnick will be Ranking Minority Member.