Posted at 10:46h in Voice of the Project by Katlyn Straub 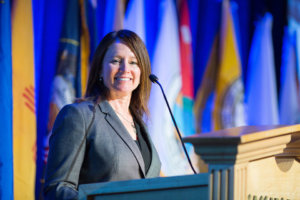 Bureau of Reclamation Commissioner Brenda Burman is exceptionally capable and well prepared for her new job. Her résumé reads like a many-years-long western water training program to be commissioner: law school and legal work in Wyoming, followed by working for renowned western water law attorney and United States senator, Jon Kyl, on Capitol Hill, and then working for Reclamation; the U.S. Department of the Interior; the Nature Conservancy; the Metropolitan Water Agency of Southern California; and most recently, the Salt River Project in Arizona. The only possible missing component would be working for an irrigation district or perhaps growing up on an irrigated farm. However, years of working on western water policy has allowed Commissioner Burman the opportunity to meet and build working relationships with the irrigators in all the western states. Additionally, she has always been a big believer in on-the-ground learning and has taken every opportunity to visit and tour western water projects. As a result, she has an unparalleled network of friends and contacts in the western water community.

I worked for Ms. Burman at Interior during the George W. Bush administration. When she left her position as deputy to Commissioner Bob Johnson to become the deputy assistant secretary for water and science, I had the great fortune to follow in her footsteps and serve Commissioner Johnson as his deputy commissioner. There were countless meetings and briefings we both attended. Her intelligence, steady demeanor, and unflappable coolness under fire were always apparent. She had the opportunity to work for Commissioner Johnson longer than I and observe his especially effective management style. In the first few minutes of every meeting, Commissioner Johnson would say “we will work with you” to whomever we were meeting with. He meant it and expected it of his staff. In the office, Commissioner Johnson was a master of personal relationships, always seeking input and motivating people. Commissioner Johnson believed in getting out and meeting with those dependent on water and power from Reclamation and was constantly flying all over the West to meet and speak.

Though Commissioner Burman has already made the history books as the first woman to be commissioner, she will draw on her experience and all that she has learned from her great mentors to be the commissioner that future commissioners are compared with. The irrigation and power communities can expect a highly accessible, dedicated, and constantly-in-the-West commissioner. Her top issue? Infrastructure.

Article reprint and photo permission given from Irrigation Leader.  Kris Polly is editor-in-chief of Irrigation Leader magazine and president of Water Strategies LLC, a government relations firm he began in February 2009 for the purpose of representing and guiding water, power, and agricultural entities in their dealings with Congress, the Bureau of Reclamation, and other federal government agencies. The League works with Water Strategies LLC on behalf of the Columbia Basin Project. Kris can be contacted at Kris.Polly@waterstrategies.com.